Recently, I’ve been in a slump regarding writing and blogging.

It’s been a few months of not getting any ideas to write about or not even finding any interest in writing.

Of course, the geek that I am, I try to solve the issue by buying a new gadget. That should solve the problem. Just throw money at it.

I haven’t had a portable device to write on while blogging since the pandemic started.

I’ve pretty much used my Mac Mini for writing.

I have my Macbook Pro for my full-time job, but I only use it for my day job stuff and not my blogging or writing.

I chose the Surface Pro as my new personal laptop, which I use primarily for writing my blog! 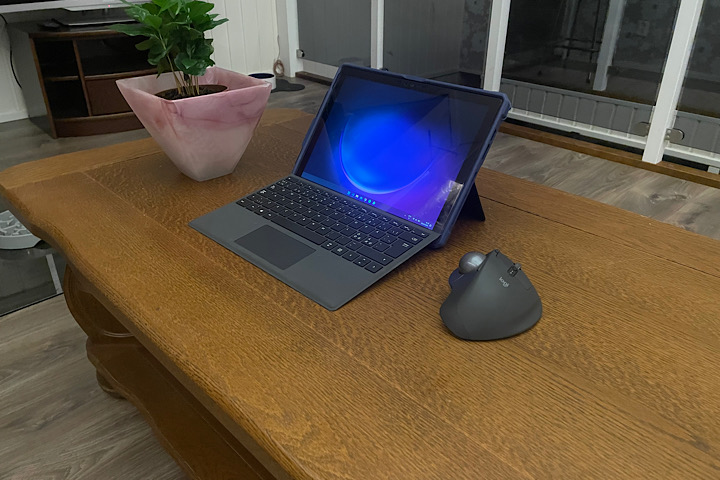 My needs and wants for my new laptop

Having not owned a laptop for quite some time, I was pretty out of sync with the current market situation regarding laptops.

I spent quite a bit of time on Youtube watching channels like Dave 2D and Unbox Therapy for videos about the latest and not so latest laptops, laptop trends, and so on.

I tried to understand what sort of specs, brands, price ranges, and designs we are talking about overall.

Finding a laptop primarily for writing means that I wanted to have a great keyboard.

There is nothing worse than spending countless hours typing on a horrible keyboard.

From all the reviews, videos, and research I did, the Surface Pro keyboard (case) was consistently ranked as the best keyboard.

The price wasn’t the most important thing I was looking for, but I tried to look for a product or a deal that would get myself and my needs the most worth for the money.

If 100 dollar laptop satisfied my needs, I would be thrilled with that.

One primary requirement I had when I was looking to buy a new laptop was that I wanted it to be very portable.

One could think that all laptops are portable, but there are quite a lot of differences when it comes to weight and size.

5000 USD gaming laptop is not the most portable one, while the Surface Pro is as mobile as possible.

With portability also comes the question of battery life, which unfortunately isn’t the greatest in a Surface Pro and there are better lasting alternatives out there.

For my needs, however, portability means that I am comfortable switching rooms in my house with my laptop, and I would pretty much always have access to a socket for charging.

For some reason, I like having a touch screen on a device.

It is almost a must-have feature for me to have the ability to do specific tasks with touch gestures or a pen, for that matter.

Not that I wouldn’t be able to complete these same tasks with a keyboard and mouse, but I like to have the option to decide and sometimes mix it up with touch gestures.

Having a beautiful, well-balanced design was up there for my requirements.

I typically like very minimalistic designs for both the outside cover and the screen and sides.

As someone who owns quite a few Apple devices, I have gotten used to having high-quality design gadgets.

Apple has set the standard for my aesthetic needs; it was a long shot even to leave the Apple ecosystem.

Luckily though, the Surface Pro ticked enough boxes, even the aesthetic one, which made me make the jump away from Apple.

As an optional requirement, I wanted to be able to run some light games or little heavier games on low graphics.

Sometimes my wife and I like to play Civilization and wouldn’t mind turning down graphics if the game would otherwise work well enough to complete a game.

I have also had an almost decade-long break from Counter-Strike, having last played 1.6 regularly, and was bouncing around the idea of maybe wanting to play CS:GO from time to time.

I ended up sacrificing not prioritizing gaming when choosing the Surface Pro as my new laptop. 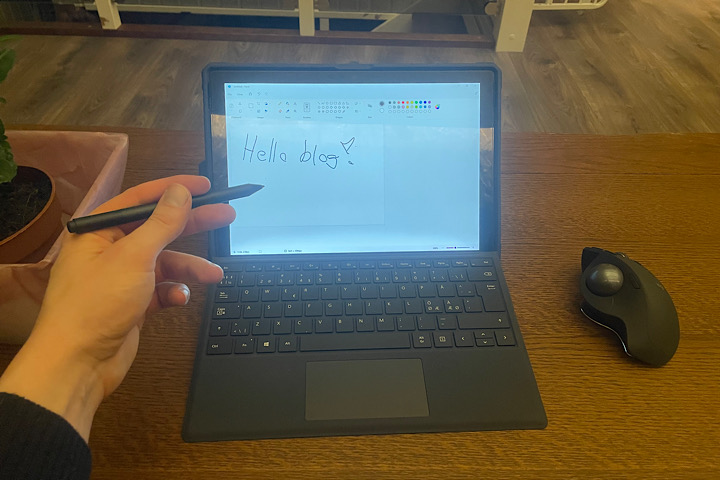 Which devices was I comparing?

I was looking at the entire laptop market when deciding which laptop to buy.

Having been deep in the Apple ecosystem for many years now, Macbooks were the primary laptops I was looking at.

I was very interested in the M1-line as they were the newest and the most talked-about devices.

What made me question getting an M1 Macbook was that I wasn’t sure I would need all the performance they come with.

Also, I don’t enjoy typing directly on a Macbook laptop for some reason. I like the keyboard, but the metal (or is it aluminum?) surface rubs me the wrong way when resting my hand on the edge of the keyboard.

What I liked about the M1-line of Macbooks were aesthetics, portability (for Macbook Air), macOS, and performance. Also, having the latest ports and variations was top of the line, but I didn’t end up ranking them high enough for my needs.

I was looking at the gaming laptops for the sole purpose of having the option to play some games on the computer if I ever wanted to.

Having gamed so little over the past few years didn’t have enough weight for me to go and purchase a gaming laptop.

The closest I came to choosing a gaming laptop was the 2022 upcoming Asus Rog Flow Z13, which is a 2-in-1 tablet, similar to Surface Pro but with much better performance

Having learned about the 2-in-1 laptops, I was sure I would be getting one from this niche.

2-in-1 laptops are both tablets and laptops at the same time.

However, most of them don’t have the option to detach the keyboard from the primary device, which, in my eyes, makes them still a laptop.

Surface Pro was among the few 2-in-1 laptops that had the feature to detach the separately sold keyboard case from the central unit.

Tablets were also a category I was looking into when considering a device primarily for writing.

While looking at the tablet category, I was also looking into the keyboard cases that were available for them.

There weren’t that many tablets that interested me except Apple tablets, mainly the M1-line again.

However, I couldn’t justify paying such a large sum of money for such a powerful device shipped with iOS. All that power is for basically no use. 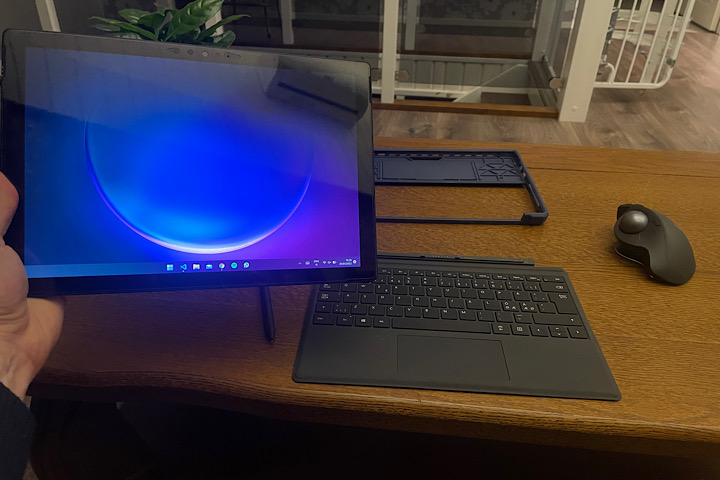 After going through all the different options and categories and getting up-to-date with the current market situation, it was only a matter of finding the best deal that would satisfy most of my needs.

It might not be the most glorious ending to my process, but I quickly decided to buy the Surface Pro 6 as a second-hand deal from my local second-hand store.

Had I found a good value deal for a Macbook, an iPad, a good 2-in-1 laptop, or a gaming laptop that would have ticked enough boxes, I probably would have gone a different path.

While this device was only two years old, the same package would have cost more than 1500€ on Amazon when I found this deal.

The keyboard is fantastic.

Battery life is much better than expected.

The screen is excellent.

I haven’t had the urge or the need to be running triple-A games like I thought I would. Time will show if that need grows stronger, in which case I will have my eye on the Flow Z13 line or next-generation M2 or beyond lineup.

For now, I have a portable device to do some blogging. No more excuses for not having a great writing device. Hopefully, having a new gadget makes me want to spend more time blogging and writing.